The lithium battery industry has undergone great strides to meet the ever-increasing power demands of electronics and equipment. These batteries are found in power tools, cars, medical devices, and a range of other machines. Many different sizes and shapes of lithium batteries were being produced during the past two decades as demand fluctuated.

Cylindrical cell models come in a number of sizes as their popularity has caused massive growth in production. Several cell models are available, however, the two that are competing head-to-head when it comes to size and capacity are the 18650 vs. 21700 models (Figure 1). 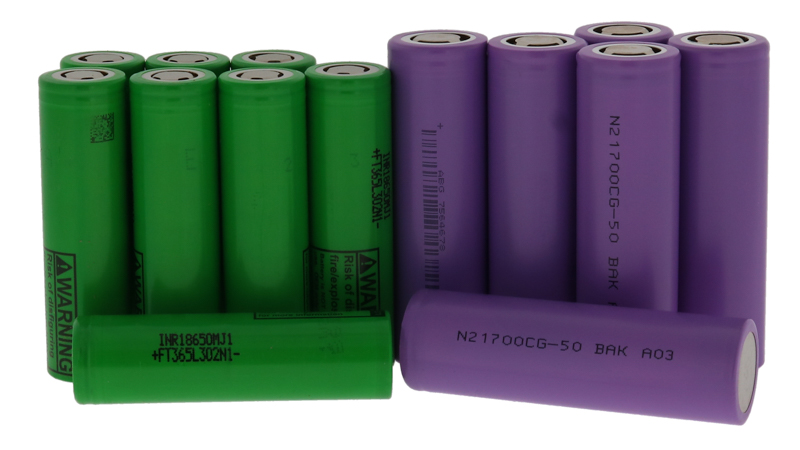 The 18650 battery cell model became the most optimized lithium battery to be produced in 2013, although it has been around since 1994 as Panasonic first debuted this cell. The battery was longer and wider than the standard AA batteries as the numbers designate the cell model’s size. For the 18650, it was 18mm diameter and a length of 65mm. These batteries provide 2,300 mAh to 3,600 mAh capacities and about 3.6 volts to 3.7 volts.

The cells neared a peak reaching 2011, yet then came into new demand with the rollout of electric cars such as the Tesla. The production of drones, medical devices, and mil-aero equipment also required these batteries. In 2013, nearly 2.55 billion 18650 cells were produced. The batteries had a good reliability rate and were low in costs to produce per watt hour.

When looking at the current market, many electronics have gone through drastic design changes. Equipment that required greater levels of power was becoming slimmer and flatter, such as tablets and smartphones. While the demand waned in these market sectors, the fear of battery shortages for the electric vehicle, mil-aero, and medical industries caused manufacturers to create an oversupply of these types of cells. However, the increasing power demands of electronics will soon cause a need for cells with greater capacity. Due to this scenario, the 21700 cell models may meet this rising demand.

The 21700 cells became introduced in 2017. They were made in a joint effort between Panasonic and Tesla. The 21700 battery cell has a dimension of 21mm diameter and 70mm in length. The cells are slightly larger than the 18650 and have a higher capacity. These cells have the same nominal capacity of the batteries they were designed to replace, as they still came as 3.6 volts to 3.7 volts. Yet, they have a greater capacity of 4,000 mAh to 5,000 mAh.

The 21700 batteries may come protected or unprotected. Protected cells have a battery management system (BMS) for protection and to prevent overheating. Unprotected cells do not have these safety protections. While being available as cylindrical, the batteries may also come as flat and may also have a button-top version. These battery cells were designed to replace the 18650 for electric vehicles.

The charge and discharge rates for both cells are basically similar. There may be higher polarization for the 18650 cells, while the 21700 cells have lower resistance and stronger heating. When the battery undergoes cycling, the capacity fades for 21700 cells and 18650 cells are the same. 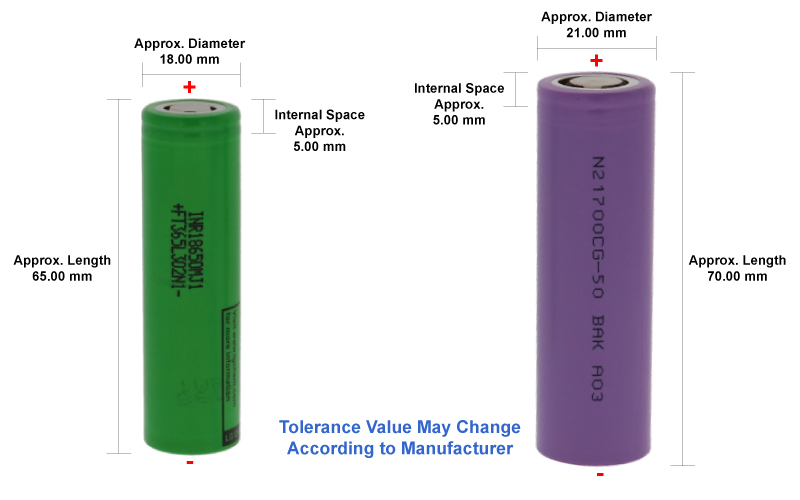 Electronics and car manufacturers have looked at the 21700 as a suitable replacement for previous lithium cell versions based on their ease of manufacturing as well as the higher capacity options. The design options for these cells are numerous, as they can come as button cells, prismatic cells, and pouch cells. For designs that have higher costs to the manufacturer, such as pouch cells, cost reductions can be obtained with both the 18650 cells as well as the 21700 cells. In addition, major cost reductions are expected for several years when manufacturing pouch cells as more economical production methods are introduced with the increase and changes in technology.

The benefits of having a battery cell with greater runtime and more capacity will allow the 21700 to be a suitable alternative to the 18650. Yet manufacturers will still continue to roll out the 18650 cells for various applications that do not require the larger capacity to function and when space requirements force the cell design to be smaller in size than the 21700.

When looking at the manufacturing industry for lithium cells, the need for lightweight batteries with flexible designs and high capacities will remain in demand for the foreseeable future. This increased capacity will force manufacturers to consider how to make changes to the 18650 cell models to convert them to 21700 without any redesign.

The flexible PCB areas in rigid-flex circuit boards offer a higher range of capabilities than traditional rigid circuit boards with wired interconnects. When the product design requires high-speed signals and controlled impedance (Figure 4), the flexible board can handle the transmission loads effortlessly. The flexible areas can also provide high levels of shielding for EMI and RF interference from either component within the product or from outside sources. Another benefit to rigid-flex circuits is that they work reliably even when being used for applications in harsh environments. The boards have good corrosion resistance, chemical resistance, and UV resistance. They can also handle higher temperatures up to 200°C while being able to dissipate generated heat.

Many top-tier cell manufacturers are shifting their focus from the historically predominant 18650 cell model to the 21700 cell model. As more manufacturers move in this direction, the 21700 cell designs and chemistries will vary between each company. Selecting the right 21700 cell will be dependent on the requirements of the application, the size of the required battery, and other specifications. One of the major design considerations that will become an important factor with battery manufacturing rests with the flat cells. If the same cell performance of a 21700 cylindrical cell can be met when forming it into a flat cell design, the market for these cells will rocket forward for decades to come.

In the near future, the demand for 18650 cells will continue onward for many mil-aero, medical, and automotive applications. As more 21700 cell designs saturate the market, this saturation may cause manufacturers to lower the amount of available 18650 batteries when switching over their production line capabilities. Speaking with a battery pack manufacturer like Epec, regarding the design of their cells allows a company to figure out which type of batteries to use currently and what changes may need to be made in the future if a battery cell becomes obsolete.

Need Help Determining the Proper Cell for Your Battery Pack?

From design to production, our team of experienced engineers at Epec is here to help you design a custom battery pack that meets all safety standards and regulations involved with lithium chemistries. 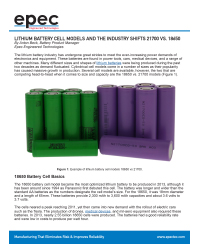