In a typical supermarket, refrigeration alone accounts for more than 35% of the energy consumed. It has become the object of increasingly stringent legislation targeting the vast energy saving potential of commercial refrigerators and freezers.

Energy Star, the international standard for energy efficiency in consumer products, mandated that by 2014, refrigerators must use 25% less electricity than current Energy Star models to maintain their Energy Star approved status. To meet these requirements, supermarket procurement departments are increasingly specifying that all new and retrofitted commercial refrigerators and freezers be fitted with electronically commutated motors. Energy Star estimates that replacing all existing commercial solid door refrigerators and freezers in the U.S. with Energy Star qualified models would save $410 million per year or more than 35% percent of the energy consumed by models currently on the market.

Current energy consumption issues stem from old technology. A typical American supermarket has about 400 shaded pole motors in commercial refrigerators and freezers running 100% of the time. The efficiency rate of these motors is in the order of 15%. This means that 85% of their energy consumption is transferred as waste heat into the environment and must be removed or cooled down again by the refrigeration and air conditioning system, causing additional consumption of energy.


EC Fans & Drives, a division of Epec, offers a, proprietary electronically commutated motors (ECM), the ECY Series. This motor, on average, is 70% to 80% more efficient than the traditional shaded-pole or permanent split capacitor (PSC) motors that are used in most commercial refrigeration applications.

A refrigeration system running this motor would draw a reduced electricity usage of 70% to 80% in comparison with a system running on traditional shaded pole or PSC motors. If this saving in energy cost is multiplied by potentially hundreds of motors in one facility, the actual dollar savings could run to thousands of dollars per month.

The ECY Series motors' energy efficiency can be attributed to its flexibility. It has three pre-set speeds that can be selected for each application in a band ranging from 600 to 2,300 rpm and is available with 0-10V speed control as standard. This contrasts with the traditional shaded pole or PSC motors that have historically powered refrigeration evaporator fans that run full speed, 24 hours per day, 7 days a week, 365 days a year. Because there is no ability to slow the motor down to take into account nighttime operation or change in ambient temperatures, these motors are always on and are always drawing maximum power.

When the cooler or freezer temperature is stable - that is, not requiring maximum output from the refrigeration system - the ECY motor-equipped system can reduce the motor speed by half, thus further drastically reducing power consumption.

This motor can also significantly reduce internal operating temperatures. Due to the inefficiency of shaded pole or PSC motors, their use in a commercial refrigeration system will actually increase the internal temperature of the refrigeration unit. The ECY motor has no metallic brushes to create a magnetic field. It uses electronic commutation technology to sense the rotor position and switch supply accordingly. The lack of brushes means that less heat is generated by the operation of the motor itself, thus lowering power consumption and significantly increasing reliability and life expectancy.

As refrigeration companies scramble to make their machines meet the Energy Star requirements that go into effect, energy efficient electronically commutated motors like the ECY Series will be a popular solutions to making existing refrigeration units meet these qualifications. 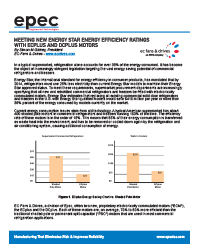