Batteries have come a long way since their invention, from Volta's voltaic pile of zinc and copper plates to today's high tech lithium ion batteries. The energy density (both volumetric and gravimetric) of battery cells has steadily increased over the years with new battery chemistries. 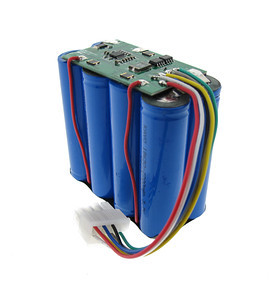 The following added value technologies are part of the reason today's batteries can be viewed more as power systems/power supplies than as simple batteries.

In the past, wireless battery charging relied on each company's proprietary design. The Inductive Power Standard (QI) lets companies like Epec embed wireless charging electronics into batteries to work with off-the-shelf wireless charging pads that already exist. Custom charging pads can be designed to cosmetically match a product, though there may be limitations in power depending on the application.

As part of an embedded battery charging solution, a battery can be powered as it is being charged. Input power can be very limited using a small wall brick, a wireless charger or a USB charger. In these cases, reducing the charge current to the battery when the system is momentarily demanding more power is required so that the input power is not overloaded. This is done by having two current loops, as shown in figure 1. The red loop defines the total current that can be used by the system and battery pack while the blue loop defines the maximum battery charge current. As the maximum total current defined by the red loop is reached, the charge current to the battery is reduced proportionally to zero if needed. However, care must be taken not to draw more power than is defined in the red loop, since this could still overload the input power supply.


System output power can also be regulated to provide constant voltages higher or lower than the battery voltage. Figure 2 shows the discharge rate of a lithium ion cell under various loads, which can also vary with temperature. 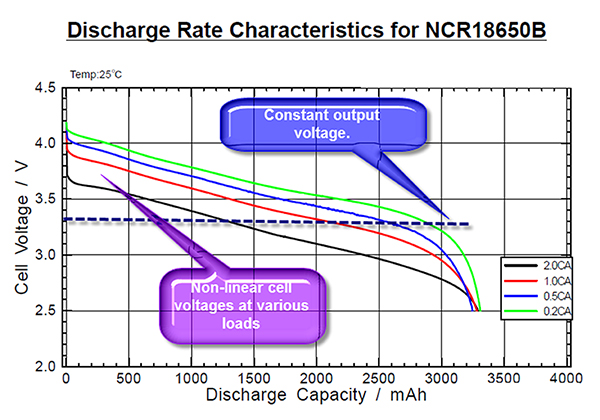 Figure 2: Discharge rate of a lithium ion cell under various loads, which can also vary with temperature.

In figure 2, the blue dashed line represents a constant output of 3.3 volts, which can be regulated and maintained despite the battery's varying voltage.

System output voltage can be used in conjunction with the fuel gauge to adjust itself to signal the end of discharge, making batteries backwards compatible with non-intelligent systems. When replacing older batteries with newer lithium ion batteries, old fuel gauges may give false readings, because they are designed specifically for older battery chemistries. This can be overcome by having an on-board lithium ion gauge adjust the output voltage to reflect the old chemistry's voltage profile. The old battery pack system will then operate as if the old battery were still being used, giving the correct reading.

Figure 3 illustrates how dropping the regulated output voltage slightly at the end of discharge to signal low battery condition. 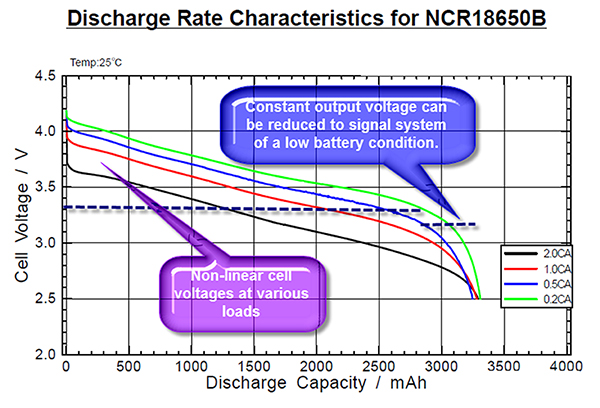 A battery fuel gauge lets the user know how much power is left in the battery. Battery pack fuel gauging can be accomplished in several ways:

Texas Instruments (TI)'s impedance tracking fuel gauge technology further offers a solution to issues with inaccurate readings due to aging and temperature. Using impedance tracking, the fuel gauge may be programmed to be accurate within 1% for the life of the battery.

GPIO can be used to control any battery subsystem or control end-product functions using a simple two-wire interface, I2C.

Examples of GPIO applications include:

Today's battery packs can offer embedded electronics, which improves the safety, reliability, cycle-life and functionality of the battery while giving the end-product system engineer more options to make the end-product more reliable and user friendly. With embedded battery chargers, batteries last longer by being charged to their ideal specifications and only within proper temperature limits.

Accurate fuel gauges allow batteries to be discharged to almost empty with confidence; hence, batteries do not need to be oversized making them smaller, lighter, and more dependable. GPIO interface may provide access to information or functional control you had never thought possible.

With these added value electronics available with custom battery packs, imagination is really the limit for future battery technologies.

Does Your Application Require a Smart Battery Pack Solution?

Our team of experienced engineers is here to help you design a custom smart battery pack with all the testing and certifications that meet all industry standards and regulations. 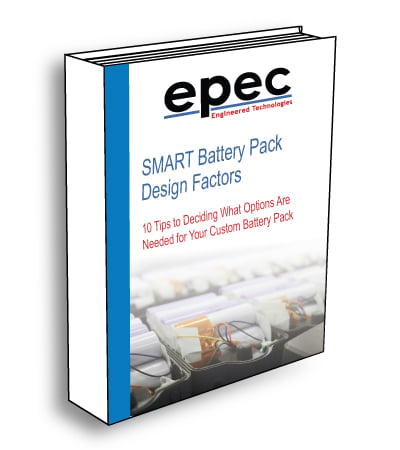 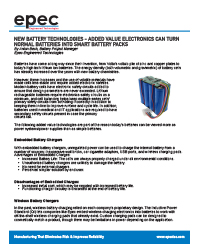