Battery pack configurations can be designed with several options, some of which are determined by the chemistry, cell type, desired voltage and capacity, and dimensional space constraints. The basic explanation is how the battery cells are physically connected in series and parallel to achieve the desired power of the pack.

If you require more current than a single cell can supply, you may need to put cells in parallel. If you need more capacity to give longer run time, you may also put cells in parallel. Many times, the physical configuration makes it more attractive to use many small cells rather than a few large cells, since a large block is harder to fit than several small subunits.

The physical layout of the configurations is typically designed to fit within a desired dimensional space. Pure nickel buss material (and spot welding to assemble) is the most common interconnect method. However, when a design requires high pack amperage, the buss material becomes another critical factor for the design.

There are an infinite variety of battery pack combinations. Below we have outlined the most popular for cylindrical cells.

Most battery packs are spot welded together using nickel strip for contacts. Soldering directly to the cells is dangerous for the cells. It is easy to melt or disturb the safety vent, thwack the seals, or cause internal shorting if the heat is too high. This damage might not be noticeable until later.


How many amp-hours do I need?

Cell capacity is rated in amp-hours or milliamp hours. The symbol for capacity is C. This is amps times hours. Divide by hours and you get amps; divide by amps and you get hours. For example, a 5-amp hour battery is the same as a 5,000 milliamp-hour battery. If you want to discharge in 10 hours, you can get a current of 5/10 = 0.5 amps. If you need 100 milliamps current, then you can run for 5000/100 = 50 hours.

Often a discharge or charge rate is given proportional to C. So a discharge rate of C/5 means C/(5 hours), or the constant current to fully discharge the battery in 5 hours.

The calculation of run time versus current is a rough estimate, but is accurate under the right conditions. The faster you discharge, the lower the capacity of a battery. This trade-off depends on the battery chemistry and construction. Usually the capacity of a battery is quoted at a C/20 discharge rate. So, a 12-amp hour battery sealed lead acid battery will actually put out a steady 0.6 amps for 20 hours. However, if you discharge the same battery at 12 amps, you expect to run an hour, but you will only last for 22 minutes.

Different battery chemistries differ in this respect. Lead acid batteries are probably the worst at the rapid discharge end of the scale. NiCad and NiMH are much better.


How do you determine the current that your system draws?

The idea is that you want to design your pack so that the voltage swing of the batteries is adequate, and where the power consumption is the least. Some systems will show approximately constant power consumption no matter what the battery voltage is, and some will have a sweet spot where the power is lowest. If a variable power supply is not available, chart the current versus the voltage of the battery during a discharge cycle. If making actual measurements is not possible, use the system data sheet, or the "boilerplate" sticker on the back to find the rated wattage or input current. This will usually give you a high estimate, or a peak value.

Batteries in Series and Parallel

Different NiCad and NiMH cells are best used in series, not in parallel. This is because keeping the battery pack equally yoked during repeated charge and discharge conditions can be a problem. So, a good approach is to choose the cells that will give you the capacity and current that you need and put them in series to get the voltage you need.

When used in series, the voltage is multiplied but the amp-hours stays the same. So, three 5AH 3.6V in series would give a 5AH 10.8V pack.

When used in parallel, the voltage stays the same and the amp-hours multiply. So, three 5AH 3.6V cells in parallel would give a pack that is 15AH and 3.6V.

The first question to answer is: "How much voltage do I need?" The second is: "How many cells in series do I need?"

Furthermore, if you want to be able to charge while your system is running, the system must be able to accept the charging voltage, which is always higher than the nominal or the fully charged voltage.


Matching Cells in a Pack

Be careful to match the cells in a battery pack. When a battery pack is near zero volts under load the weaker cells will go into reversal and suffer damage and perhaps venting.


Resistance of the Nickel Strip in Battery Assembly

Nickel foil is used to spot weld packs together. Nickel is fairly low resistance yet has enough resistivity to be spot welded. It is strong, has very good corrosion resistance, and will not oxidize easily. The resistivity of nickel is 6.9 x 10-6Ohm-cm. The formula to be used to calculate the resistance for a nickel strip is R = { L / ( w*t } rho, where L is the length of the strip, w is the width, and t is the thickness, all in cm. The length L can be estimated as the diameter of the cells. The following table gives typical values. This is a conservative estimate, since in many cases the spot welds are closer to the edge of the than we have assumed.

With a connector and heat shrink wrap they look like this: 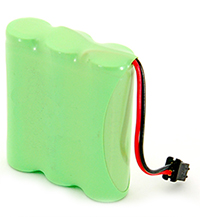 There are two ways to start packing them. One could be called the cubic, and the other face centered cubic, or nested. 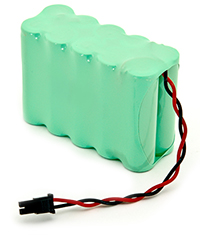 Nested configurations follow the same connection principles using the same nickel tab material to achieve the design. This type of configuration is typically supported with outer shrink wrap to give the cells additional support. The exposed ends of the cells are typically protected with fish paper.

Some nested deigns are even potted to support the cells and protect the completed battery for overall integrity.

Either method is acceptable and should be considered for best handling practices and protection for the battery during transit. 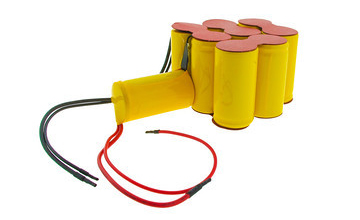 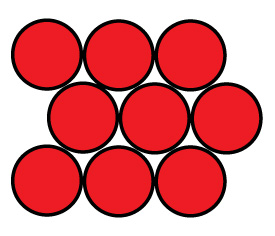 Circular configurations are common and used in many applications. Again, following the same tab welding principles, can be stacked for more capacity, and typically shrink wrapped to support the cells.

For a 3-cell pack, you can put the cells in a tube: 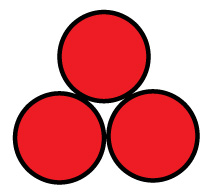 For a four-cell pack in a circular tube: 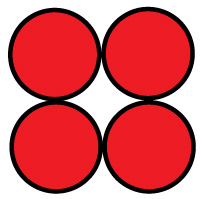 The diameter of the circumscribing circle is 2.41 D.

For example, with AA cells the diameter is 14.2 mm, so three would fit into a tube 30.7 mm in diameter, and four would fit in a tube 34.22 mm in diameter. You will want to expand this slightly to account for up to 0.5 mm variation in cell diameters.

Example of a stack of cells configured end to end below:

These are typically constructed by standing two cells side by side and welding a nickel strip across the terminals. The cells are configured end-to-end by bending the nickel strip in a "U" shape. Overall pack dimensions will need to allow a thickness increase of 1/2 to 1 mm per junction for this to accommodate the folded nickel tab. 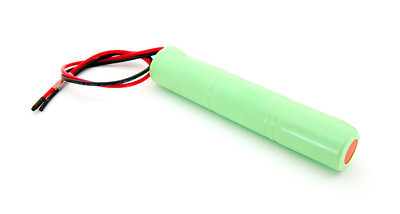 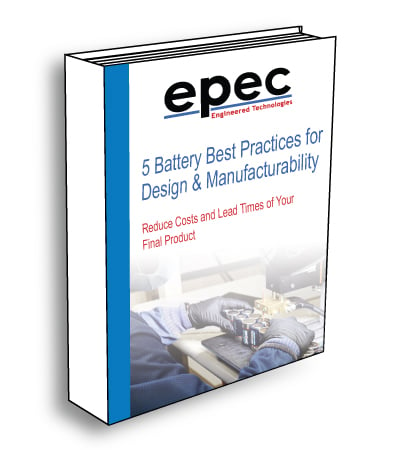