Epec was approached by a medical device OEM to build a flexible cable assembly that would be used to monitor patient movement. This assembly would be attached to monitoring equipment inside a hospital bed air mattress and pass through the wall of the mattress at the bedside. The current supplier of this assembly was having difficulty meeting the flexibility requirements of the application. Also if there were variation in the diameter of the cable, there would be failures in the assembly due to lack of bonding of the cable jacket and the grommet.

Since the assembly would be installed through the wall of the air mattress, it would need to be produced with the understanding that there could be no air allowed to transition up the cable assembly and leak to the outside environment. There would be a grommet installed at the point where the assembly went through the wall of the mattress. This grommet had to be able to be welded to the air mattress and not allow any air from the mattress to escape. The mattress materials had already been defined and any materials used to mold the grommet needed to be compatible with the mattress materials, had to be welded to the mattress, and required to be fully bonded to the cable jacket. The weld point also needed to be able to withstand movement and not separate from the mattress when in use.

The cable assembly needed to be flexible to withstand the movement of patients in the bed. In addition, it needed to be routed along the bed frame to the connection point with the patient monitoring equipment. The assembly also needed to be made with materials that could withstand the daily cleansing of the hospital room which includes exposure to cleaning fluids.

Based on the requirements of the application and the issues presented to us, the proper material selection became the focal point of the solution. To manufacture a product that could meet the flexibility requirements, we chose to use a conductor with a very high strand count and a primary insulator that could withstand the exposure to those cleaning and sterilization fluids used in a hospital or clinic environment. We also utilized manufacturing methods that would produce the most flexible assembly possible. Based on our past experience in manufacturing cables and wire harnesses for medical devices, the manufacturing methods used produced a cable core that discouraged any air from transiting through the cable itself causing the air mattress to become under-inflated. 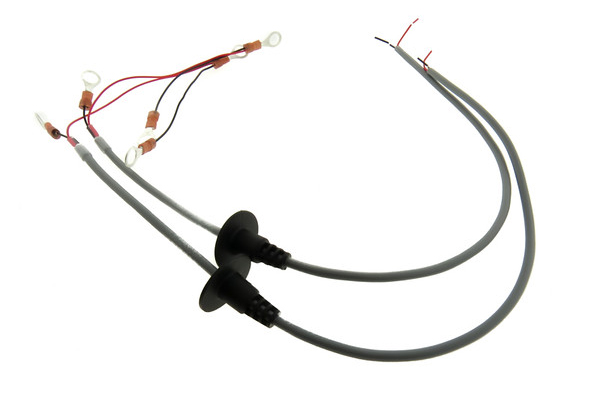 The jacket and over mold material that was chosen provided additional flexibility and allowed for the welding of the grommet to the air mattress. This material also provided protection of the assembly from the sharp bends that were needed in the routing of the assembly and the chemicals and fluids used in the hospital rooms for cleaning and sterilization.

To eliminate any air pressure loss, the area where the outer sheath was stripped away from the cable core was sealed using RTV to fill any voids between the insulated conductors and the other components under the cable jacket. To further stop any air leakage, all areas between the cable and the connectors were sealed using the RTV as well.

The grommet material was fully compatible with the air mattress material so the welding of the grommet to the air mattress provided a suitable and stable bond. This bond also allowed for movement of the mattress without putting stress on the weld joint causing failure.

Based on the materials chosen for this assembly, we were able to provide a reliable product that exceeded the customer's expectations. The provided cable assembly was exposed to and passed a pressure test up to 30 psi under both a static and flex condition, almost 5 times the psi the assembly would see in the course of its life.

The jacket and grommet materials that were chosen fully bonded during the over mold process providing a "one piece" solution to a potential area for air leakage. This material also was able to be welded to the air mattress providing a reliable and fully leak proof bond.

Based on the customer requirements, Epec was able to choose materials that exceeded the demands of the application and utilize manufacturing techniques that provided an assembly that met all of the flex requirements of this installation.