Epec was approached by a medical device OEM to help them redesign a cable assembly. This assembly is used as interconnect on a medical probe found in hospitals and clinics globally. The challenge was that a customer needed an assembly that could withstand repeated sterilization. In addition they wanted a way to easily interchange membrane switches with various levels of resistance. The various resistance levels would be dictated by the type of probe that the cable assembly would be driving.

The different resistance level switches would be installed at their facility based on orders as they arrived. The switches needed to be installed onto the cable without the use of any hand tools. Both the switches and the cable assembly would be stock items.

As orders arrive, the customer wanted to pull a switch of the proper resistance from inventory, the cable with the connector installed on it from inventory, and easily mate the two components together in the shortest amount of time possible and install the finished switch/cable assembly into the probe housing.

Epec established a method of installing the connector using RTV to fill the back of the connector body and the empty pin slots on the connector (not all of the connector pin slots were populated). The use of the RTV allowed Epec to test the assembly using a 5 PSI air source to make sure there were no voids that could allow moisture intrusion in the future during the sterilization process. 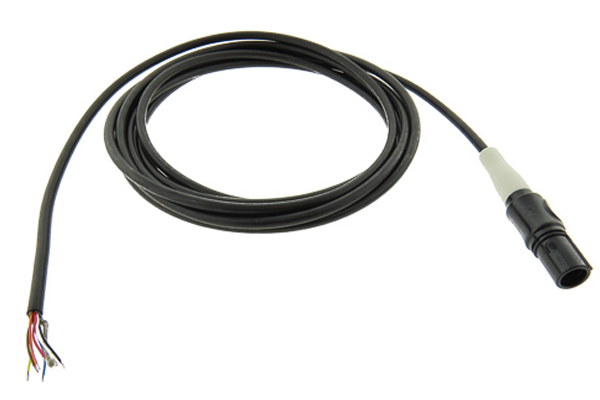 Epec redesigned the cable using lower cost materials that would withstand the repeated sterilization. By changing the outer sheath to a less expensive material, we were able to reduce costs and improve both flexibility and resistance to scuffing and cut through.

The compound we suggested met all of the customer's electrical and environmental criteria and offers a more tactile feel for ease of use by medical workers in a clinical atmosphere when they use gloves.

Epec researched the connection point between the cable assembly and the membrane switch as was able to offer the customer a solution that is interchangeable between membrane switches. On the end of the cable, female pins are crimped onto the individual wires. On the end of the tail coming off of the membrane switch female pins are installed. A small junction is used to insert the female pins into one side and the male pins into the other, mating inside the junction. The junction allows for full contact between the switch and the cable and provides an environmentally sealed point for the two components.

The membrane switches will be produced with a colored coded tag to show the various resistance levels. This will allow the customer to easily pick out the correct resistance switch to mate with the cable assembly based on their customer's requirements. This color coding will ease any concerns about using the incorrect resistance switch and provide a quick visual check to make sure the correct switch is used in the assembly.

Based on the suggestions presented by Epec, the customer was able to design a custom cable assembly that met the requirements needed for repeated sterilization.

The costs of the entire assembly were reduced based on our suggestion of a less expensive material for the cable sheath. Our suggestion of an interconnect between the switch and the cable allows the customer to keep components on the shelf and match their customer's needs in an easy to use solution – only taking a few minutes to match the proper resistance switch with the cable assembly. The color coding suggested for the various resistance switches allows for a visual selection of the switch based on the color coding and a visual final inspection to ensure the proper resistance switch was installed.