[March 6, 2012: Boston MA] The Boston Business Journal recently released the 2012 Pacesetters – a list of the region's fastest-growing privately held companies, and will single out companies that have experienced strong growth despite the tough economy. 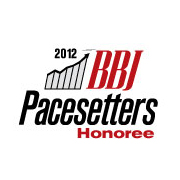 To make the list, a company had to report annual revenue growth of at least 10 percent over a four-year period and have 2009 sales in excess of $750,000 to qualify. New for 2012 – the Top 5 fastest growing firms in two categories, as defined by 2011 revenue figures & percent of growth, will be named Elite Pacesetters.

"We're always honored to recognize dynamic, privately held companies through our Pacesetters program," Business Journal Publisher Christopher McIntosh said. "But it's a special privilege at a time when these businesses are widely recognized as the engines driving our economic recovery. The success of these 73 companies testifies not just to the vision of their owners and employees but also to the health of our region."

The winners and their final rank plus the Elite Pacesetters will be recognized at a morning event on April 26th at the Westin Copley Boston.


About the Boston Business Journal