[August 28, 2012: New Bedford MA] Dana Laflash of Bristol RI has been named one of 25 MDA National Lock-Up All Stars by the Muscular Dystrophy Association (MDA). Ms. Laflash raised $8,930 in "bail" to benefit MDA during the 2011 MDA Lockup held in New Bedford, Ma – an incredible feat since more than 100,000 people participate in the MDA Lock-Up program each year. 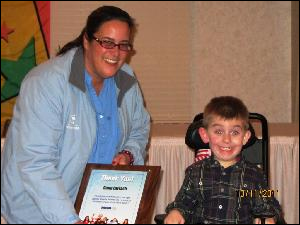 Ms. Laflash will be honored during the national broadcast of the MDA Telethon, airing Labor Day weekend. Ms. Laflash earned the All Star designation in recognition of the time she spent "behind bars for good", at MDA's New Bedford Lock-Up, October 2011.

"I am lucky to work for such a great company as Epec Engineered Technologies whose ownership not only encourages but also partners with me to raise these funds, in addition to all the great employees, customers and corporate friends who helped me as well. I could not do it without them!" said Ms. Laflash.

A warrant has been issued for Dana to be arrested on October 17, 2012 during this year's MDA Lockup, she is hoping to double her 2011 fundraising results. If you would like to help her achieve this goal please go to her fundraising website and make a tax deductible contribution.