The Technology within Touch Panels


In quarter 3 of 2013 alone Apple sold 31.2 million iPhones. It's safe to say that there are millions upon millions of end products that use touch panels for user navigation. We've come a long way in technology but how do these touch panels actually work?

Today there are over 20 different technologies that revolve around touch panels. A common type of touch panels are resistive touch panels (RTPs) which in 2012 made up approximately 26% of the market. These work by combining two conductive electrode layers separated by very small transparent insulation spacers also known as spacer dots. When pressure is applied from a finger or stylus it brings the two layers into contact (See Figure 1). This results in a drop in voltage at the contact point which is then detected by a controller. There are three types of resistive touch panels each with their own unique attributes, 4-wire, 5-wire, and 8-wire. 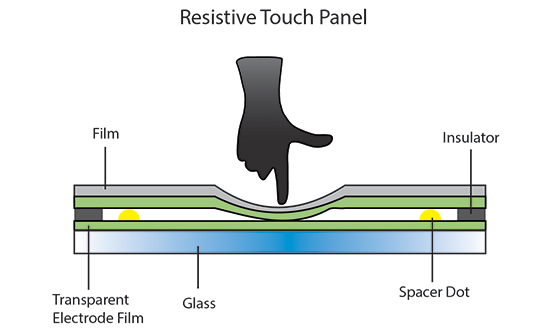 
Although there are three different types of resistive touch panels each work under the same principle, applied pressure brings two conductive layers together. The 4-wire construction consists of two separate layers; one layer carries the X and the other that carries the Y. A touch (applied pressure) will bring the two layers together and the contact point will then be calculated. The disadvantage of a 4-wire is if the top layer becomes scratched or ripped the X coordinate will no longer function and will need to be replaced. A 5-wire touch panel is constructed with a film that is suspended over the top layer and voltage is simultaneously measured at each corner. When a user touches the top surface it becomes in contact with the bottom layer causing a change in resistance which would then be calculated by the controller. Since the top layer is acting only as a probe it will still function if the top surface becomes scratched or torn unlike the 4-wire making it a more durable design.

The last type is the 8-wire and this is based on the 4-wire technology principle by adding an additional 4-wire set. Having the additional set doubles the level of electrodes and in turn will increase the overall accuracy and reduces drifts so you won't have to recalibrate as much as you would with a 4 or 5 wire touch panel. The general benefits of resistive touch panels include lowest costs in comparison to other types of touch panels. Additionally they offer low power consumption and are pressure actuated with a finger, gloves, stylus etc. RTPs are also resistant to external factors such as water and dust so if the end product were to be used in an outdoor application or in a machine shop it won't create a false actuation. Here are some limitations to consider when deciding whether or not RTPs are suitable for your application. You may be more familiar with multi-touch panels but the standard for resistive touch panels is one-touch. There are some controller companies working on multi-touch technology with resistive touch panels but again, it's not the standard.

Another limitation is the relatively low light transmission which approximately runs between 76 - 82% so if your graphics within the end product is a priority you may want to reconsider another type of panel. The touch life is lower for resistive touch panels because they use ITO film as the conductive material which is less durable than other options. Repeated pushing and selecting over time will create fractures and can degrade the touch panels' ability to operate. With a 4-wire and 8-wire expect 1 million actuations in one location because they both share the same technology. The 5-wire will allow 10 million actuations. The standard sizes for all range from 2.8" – 21" with additional custom sizes available.

Another type of touch panel, are the infrared touch panels (ITPs). Infrared technology consists of infrared LEDs (Light emitting diode) and light sensors that are placed on the perimeter of the bezel. LEDs transmit beams of light that run parallel to the assigned light sensor create a light grid. Anything that disrupts the light or reduces the light such as a finger or stylus will register a touch (See Figure 2); the controller will distinguish where contact was made. 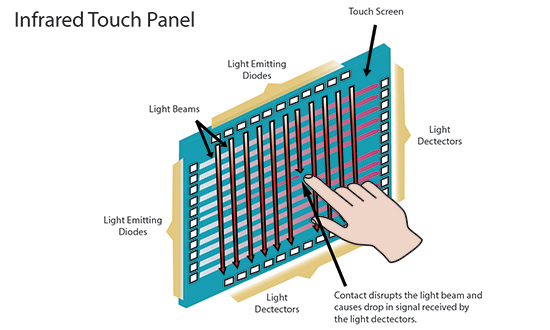 
The benefits that come with using infrared touch panels start with the size. This technology works best with larger screens. Standard sizes are between 15"- 46" with options for custom sizes. Infrared touch panels are capable of multi-touch with two contact points which will work with any opaque object. There is no flexing of layers like that within the resistive panels so the durability and touch life is a lot higher. The light transmission is greater without the need of a glass substrate. Since there isn't a need for an extra layer of film or glass over the top of the application the light opacity won't be affected as much. There are a few limitations. One is the profile height, due to the LEDs and light sensors they have a certain height to them so the bezel will be higher than in other technologies. Furthermore ITPs may be difficult to read under bright light, especially sunlight so generally infrared touch panels are used indoors.

A surface capacitive works by measuring current. A protective cover is placed over the transparent electrode film which lies on top of the glass substrate. Voltage is applied to the corners and when a finger or stylus makes contact with the surface it disrupts the current (See Figure 3). The controller then registers and determines point of contact. 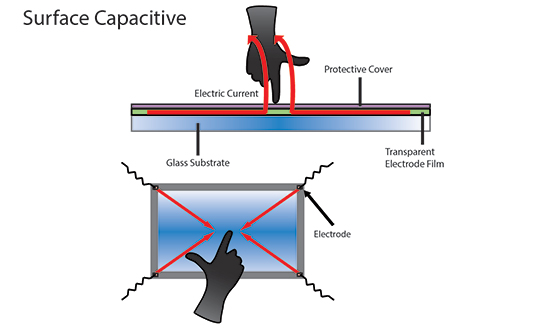 
This type of technology is commonly used within the gaming industry. Here are a few benefits and limitations. The light transmission averages 90% or above. The application is unaffected by moisture, temperature, and dust. Since there is no flexing of the surface the actuations are very high, capable of reaching over 100 million. The downside to technology is that it is only single touch. The user will also have to use a finger or conductive stylus; a glove will not register contact. This may also require a bit of calibration which is due to interference that may be around the screen/LCD. The standard size ranges from 5" – 24" with the capability for custom sizes.

Projected capacitive (PCAP) technology is the new powerhouse within the market. This is the same technology that is used within iPhones and iPads etc. In 2012 PACPs accounted for approximately 64% of the market place and will only continue to gain traction. The way this technology operates is that there are 1 or 2 parallel conductive layers that form an X-Y array of lines that make-up a grid of electrodes. These X/Y intersects are then scanned continuously. An electronic field is actually projected through the top layer of glass so the energy is creating an electro static field. When a finger becomes close or touches the top of the surface the change in electrodes will be detected which will then calculate where the initial touch was made (See Figure 4). 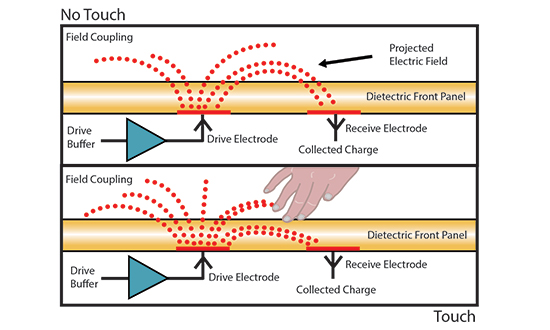 Figure 4: No contact and w/contact to Projected Capacitive Technology.


Each technology has its own benefits and limitations depending on the intended use. The top layer is usually a durable scratch resistant glass. The projected capacitive technology is capable of 2-10 multi-touch simultaneously depending on the controller being used. The touch coordinates will remain drift free, precise position location. The lighting is excellent with a light transmission of 90% or more. The technology also allows for a zero-bezel deign, there is no need for any additional housing unit.

One of the more prominent features is the auto-calibration. The disadvantage is the higher cost as opposed to the other technologies. The only other limitation is that if a user is wearing gloves it is likely the controller won't register a touch. Currently the sizes available run from 7" – 21" with the most common being 7" and 10.1".

This article should serve as a solid foundation for anyone involved in the process of selecting touch panel technology for your end product. Be sure to answer a few general questions to help simplify the process. Start with determining the industry. Will this be used in the aerospace, medical, military, or another industry? Certain specifications may be mandatory depending on the industry. Determining the size alone may prompt restrictions based on the limitation of certain technology. Then think about the type of environment where the end product will likely be used; will the user be wearing gloves? Another question is what type of durability is required? Number of touches, surface strength, and the sealing requirements are all important factors. The last and possibly a deal-breaker is cost. It wouldn't make much sense to put a high-cost technology in a low-cost end product and vice versa. This set of questions will guide anyone in the right direction in the selection of your end product(s) and will help get your end product to market faster. 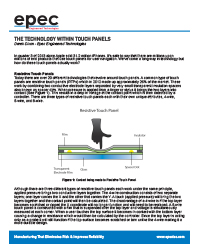